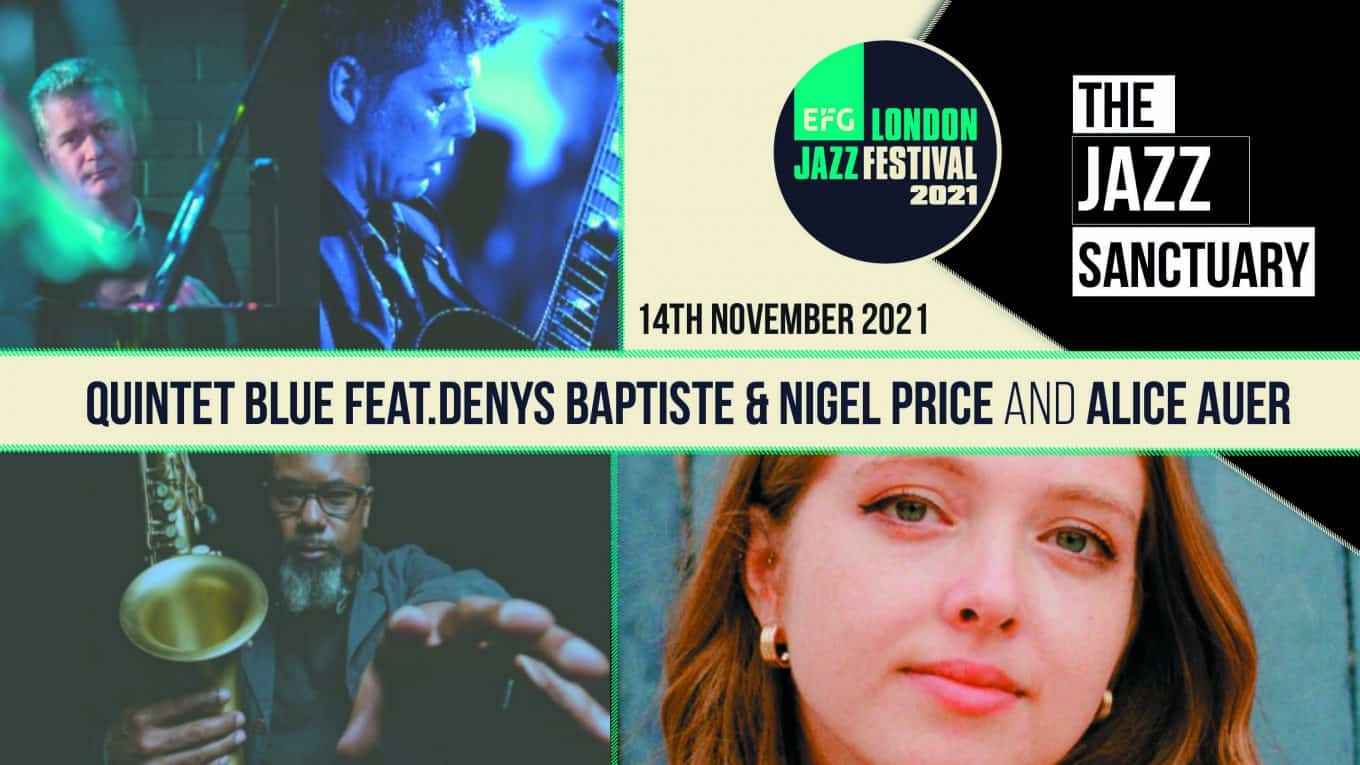 Quintet Blue is an fascinating collective of musicians who have come together to celebrate the bluesy, swinging Jazz of the 1950s and 60s, with a repertoire of pieces from Wes Montgomery, Kenny Burrell, Ahmad Jamal as well as more recent works from Charlie Haden’s Quartet West.

MOBO award winner twice over, Denys Baptiste has been described by Time Magazine as an “icon of British Jazz” with a most distinctive and immediately recognisable sound. Nigel Price is the winner of two British Jazz Awards for best guitarist and currently has five albums to his name. Bandleader Alex Webb is a prolific songwriter, arranger and pianist, whose songs have been recorded by China Moses and liane Carroll, to name just two. Quintet Blue is completed by bassist Michele Montoli and drummer Shaney Forbes of Empirical.

Alice Auer is a British singer-songwriter who takes inspiration from artists rooted in jazz and soul music including Chet Baker, Nat King Cole and Moonchild’s Amber Navran. It was Alice’s collaboration with Conor Albert on the recent ‘Smile EP’ that established her as one of the most exciting new voices on the UK contemporary R&B and Soul scene. The EP which has been streamed over 2 million times since its release, saw extensive support from Spotify (4x New Music Friday UKs, Our Generation, Jazz UK, Riffs & Runs, Sweet Soul Sunday) BBC Radio 1 (Jack Saunders’ Future Artists, Sian Elery’s ‘The Chillest Show’) and BBC Radio 2 (Jamie Cullum) as well as key tastemaker press including The Independent, The Line Of Best Fit, CLASH Magazine and Vogue Paris. Alice and Conor’s cover of the jazz classic ‘Crazy He Calls Me’ was even championed by Justin Bieber in his Instagram Stories.

Alice Auer returns with ‘Turn Back Time’, the first single taken from her debut solo EP ‘Daydreaming’, released on Young Poet, in Autumn 2021.