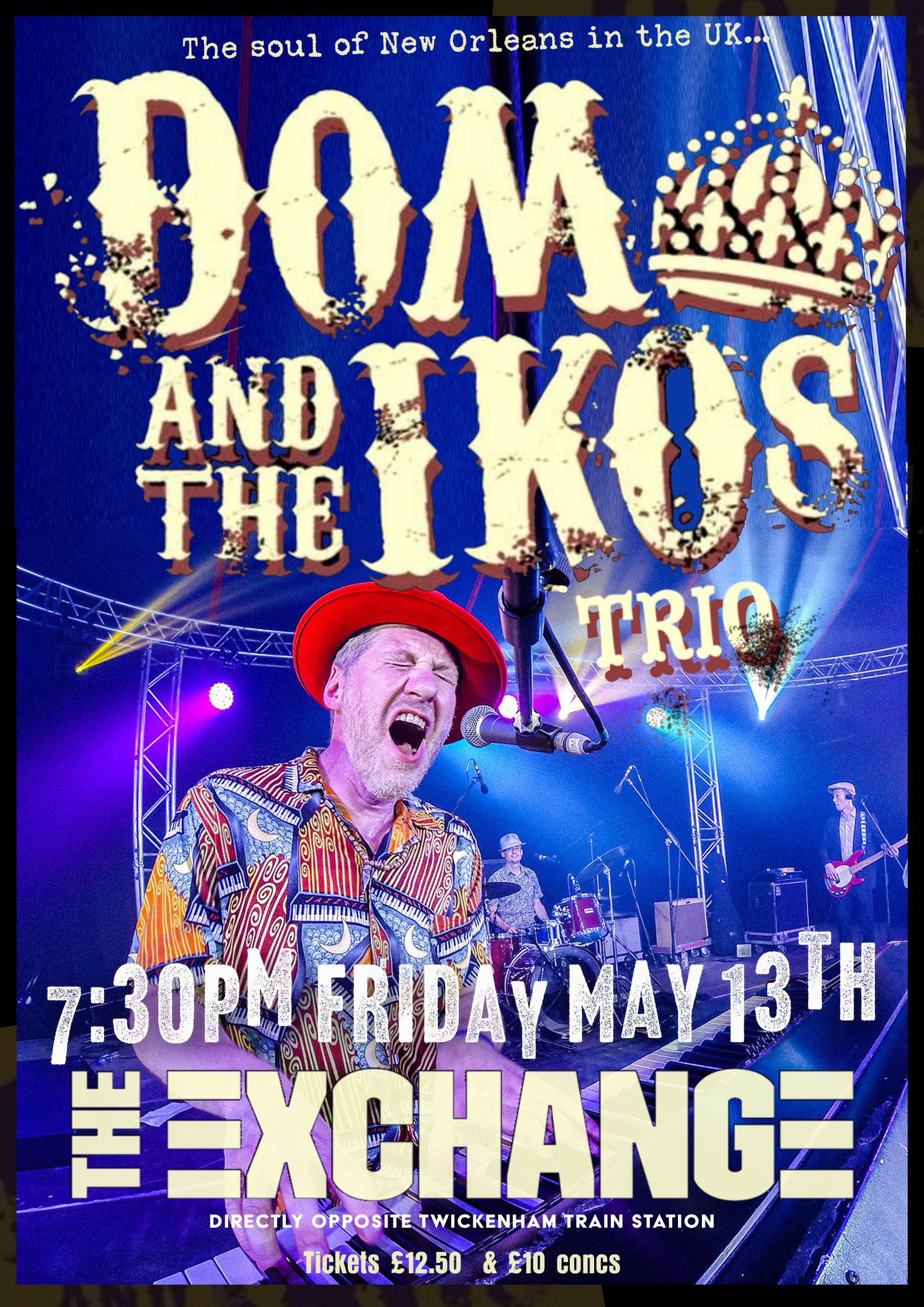 Dom Pipkin with the Ikos Trio

Let rhythm and blues piano wizard Dom Pipkin and The Ikos Trio transport you to New Orleans. All the good music. A intoxicating mix of gospel, jazz and rhythm and blues. Grab yourself a ticket for a night in the Crescent City. This is the real deal.

Recently described by Blues in Britain as “one of the world’s greatest exponents of New Orleans music”, catch The soul of New Orleans in the UK with an irresistible blend of street beats and funk that’s inspired Jamie Cullum to say “I can’t hold a candle to this guy”. An unmissable British piano led blues and jazz all-star band.

Piano virtuoso and keyboard player to the stars Dom Pipkin is one of the world’s top exponents of New Orleans rhythm and blues. Pipkin breathes new life into the classic funk sounds of The Meters, Dr John, Fats Domino and Professor Longhair, with these influences emerging in his own irresistible songwriting. His classical and sometimes rhapsodic influences are married with a tough approach to the blues and driving left hand rhythms. Pipkin’s band, Dom and the Ikos, takes the New Orleans influence and fleshes it out with drums, harmonies and wailing sax and has been resident at Ronnie Scott’s London and around the RnB club scene where its reputation as a top level live act is second to none. He is joined here by Annie Lennox and Alice Russel drummer Jimmy Norden, and bass player to Laura Marling and Tom Jones, Nick Pini.

Pipkin delivers the most authentic and compelling take on this highly infectious and life affirming blend of blues, gospel, street and jazz that is uniquely New Orleans, with a stellar list of international festivals and radio and TV appearances and fans ranging from Jonathan Ross, Hugh Laurie, David Arnold, and Jamie Cullum.

Pipkin travels the world as the keyboard player with trip-hop pioneers Morcheeba, he was Musical Director for Paloma Faith, and has played for Paul Weller, Laura Mvula, Ray Davies, Pee Wee Ellis and John Newman to name a few, but has always kept a close connection to his second home, New Orleans. A regular visitor to the Crescent City for 15 years, he has performed at the Jazz and Heritage Festival, at the world famous New Orleans “Piano Night”, and alongside its musical legends Allen Toussaint, Lilian Boutte, Jon Cleary, Ellis Marsalis and Marcia Ball. He has supported Dr John, Screamin’ Jay Hawkins and the Blind Boys of Alabama, and performed for film director Stanley Kubrik.

His piano skills have taken him all over America and Europe, New York City and San Francisco, to Barcelona, Stockholm and Rome. Pipkin headlined the UK Boogie Woogie festival in 2019 and the Steinway Piano Festival in London in 2020.