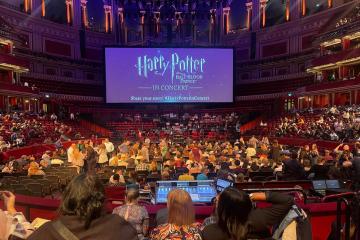 On Friday, I went to the Royal Albert Hall to watch Harry Potter and the Half Blood Prince, the sixth instalment of J.K Rowling’s classic saga.

To watch my favourite franchise in the world whilst being sat inside one of the most iconic music venues in London was a true pinch-me moment.

I think we can all agree that the Harry Potter franchise has had a huge impact on the film industry – regardless of if you’re a fan of the wizarding world or not.

There’s theme parks, spin-off movies, theatre shows, thousands of merchandise and now a concert in which audiences can watch a live symphony orchestra whilst watching wizards soar across a high-definition screen.

Harry Potter and the Half-Blood Prince, set during Harry’s sixth year at Hogwarts, follows the story of Lord Voldemort’s dark past along with the introduction of Horcrux’s and probably the most shocking plot twist of the entire franchise.

Although I have seen this movie a dozen times, and can quote practically each scene word-for-word, watching it inside the Royal Albert Hall is an experience like nothing else.

As my friend and I took to our seats, which were directly opposite the brilliant conductor of the evening, Justin Freer, I couldn’t help but admire the Harry Potter inspired outfits audience members were wearing.

Slytherin jumpers, Gryffindor cloaks, Ravenclaw headbands and Hufflepuff scarves were just a few items I spotted – I suddenly felt an ounce of regret not bringing my (very real) wand from home.

Harry Potter and the Half-Blood Prince’s opening scene is unlike the earlier Harry Potter movies, as instead of the classic Hedwig’s Theme, the audience is greeted with a more dark, melancholic tune, introducing the gloomy aftermath of (spoiler alert) Harry’s uncle, Sirius Black, who was murdered in Harry Potter and the Order of the Phoenix.

The talented Royal Philharmonic Concert Orchestra played perfectly throughout the performance – from Harry discovering the secret to brewing the perfect Draught of Living Death potion, to Ron or ‘won-won’ becoming the Quidditch crowd favourite, to Draco becoming one of the infamous Death Eaters – the performance was impeccable throughout.

During the intermission, myself and my friend enjoyed a cold glass of Pimm’s (although we wished it was a Butterbeer) as we spoke about the magical atmosphere and the talent behind each orchestra member.

The second half of the show was as precise as the first, and we were in awe of the of elegant sounds of the strings, woodwinds, brass, and A Capella from start to finish.

As expected, thousands of audience members stood and applauded loudly as the orchestra played to the sounds of the end credits.

At this point, myself and my friend were in complete shock – to know we were watching Harry Potter and the Half-Blood Prince along with the man who created some of the most legendary film scores in the world was a moment many Potterhead’s could only dream of.

Royal Philharmonic Concert Orchestra truly did uncover the true magic behind Nicholas Hooper’s unforgettable score and John William’s music of Harry Potter throughout the evening, as each member played their instrument in harmony as Justin Freer guided them through.

If you’re wanting to take a trip to the Film in Concert shows, the Royal Albert Hall have some exciting concerts in the upcoming months – including the James Bond movies and a special showing of Home Alone on December 10, 2022.

Tickets for the Film in Concert shows start from £37.00 and can be bought here