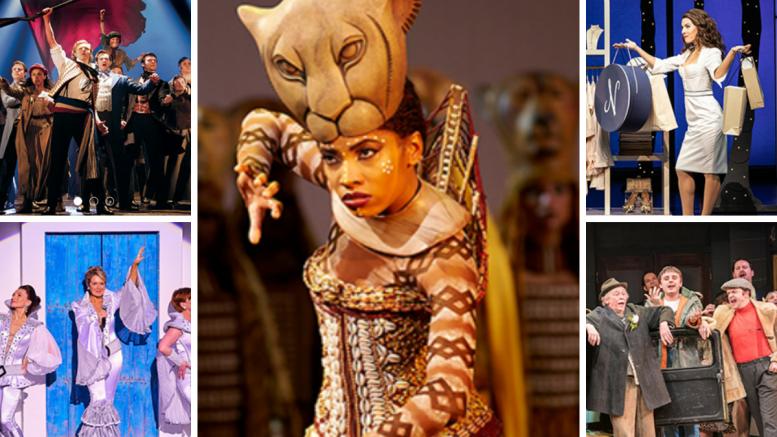 Whether you’re wild about the West End or you’re looking for an unforgettable experience, these shows are set for a standing ovation.

From classics like Les Miserables to new stage adaptations like the Back To The Future – The Musical, there are crowd-pleasing performances for everyone.

The experience days website has a simple booking system that allows you to select your seats and plan the ultimate memorable evening.

Still the world’s most popular musical.
Everybody raise a glass to the BRAND NEW #LesMiz West End Trailer. 🎥 pic.twitter.com/48Rhg5JH8N

Les Misérables is not only the West End’s longest-running musical theatre performance but it has delighted audiences around the world.

Book your experience at the Sondheim Theatre for £115 via the Red Letter Days website.

June is African American Music Month! Please join us in celebrating the Black artists who perform each night on Broadway and on Tour in The Lion King, Aladdin, and Frozen. Hear what music and performing means to them in honor of #BlackMusicMonth. pic.twitter.com/QjgqHpj6KU

Disney’s The Lion King is an award-winning show performed at the iconic Lyceum Theatre in Covent Garden.

Taking its inspiration from the animated film, it explores the circle of life for the lions and other animals living in the Serengeti Plains.

The two-person experience is available for £185 via the Red Letter Days website.

The Book of Mormon Theatre Tickets for Two

TFW you’re about to walk through those heavenly theatre doors… pic.twitter.com/RxGp0njIoJ

The comical Broadway hit, The Book of Mormon is leaving audiences in hysterics in London’s West End.

Prepare for the satirical genius of Trey Parker and Matt Stone, the creators of the animated television series, South Park.

Take to your seats at the Prince of Wales Theatre for £99 via the Red Letter Days website.

For all tour venues and tickets, see: https://t.co/9mpkTWIEYc#MammaMiaMusical #Bristol pic.twitter.com/0KIsaZhHlM

Combining the catchy songs of ABBA, MAMMA MIA! is a heart-warming and funny rollercoaster musical.

See this dazzling performance on stage in the West End at London’s Novello Theatre.

Dance in your seats for £79 via the Red Letter Days website.

Performed at the Prince Edward Theatre in London, the award-winning musical has been introduced to the West End stage in the most delightful way.

Get your tickets for £129 via the Red Letter Days website.

Theatre Tickets with Afternoon Tea for Two at Patisserie Valerie

Treat someone special to a day on the town with theatre tickets and a delicious afternoon tea at Patisserie Valerie as much if this luxurious package.

You can choose from a range of top-rated shows including the wonders of Wicked to the hilarious comedy of The Play That Goes Wrong.

Paired with a mouthwatering afternoon treat at one of Patisserie Valerie’s 57 locations for £95 ( down from £155) via the Red Letter Days website.

Only Fools and Horses: The Musical Gold Theatre Tickets for Two

Have you heard the news? #OFAHMusical has extended until the 1st October 2022! Book tickets now! pic.twitter.com/aknx1cWnpU

Head to the stage at Theatre Royal Haymarket for the musical adaptation of the popular British TV series.

The unforgettable two-person experience is available for 12 months.

Choose your seats for £199 via the Red Letter Days website.

This is what you said! 👇 pic.twitter.com/S6th8led72

Fans of the beloved 1990 Hollywood romance film will adore this musical version.

The reimagined Hollywood classic is brought to life on stage at the Savoy Theatre in London’s West End.

Treat someone special for £78 via the Red Letter Days website.

⭐ OFFICIAL TRAILER ⭐
Grease returns to the West End for a summer of lovin’ at the @DominionTheatre!

The one you want. The one you NEED! Oh YES INDEED! 😎https://t.co/jjxQkqLW6e pic.twitter.com/TO9IAObiva

Grease is the word at the Dominion Theatre and now you can delight in Sandy and Danny’s unforgettable love story.

Choreographed by former Strictly judge Arlene Phillips, this fun and heartwarming classic will be enjoyable to newbies and those who know the songs by heart.

Book your seats for £51 via the Red Letter Days website.

Back to The Future – The Musical Silver Theatre Tickets for Two

Based on the 1985 culture phenomenon, you’ll go wild for this stage adaptation of Marty McFly’s adventures with the time-travelling Delorean.

Written by the original creators, Bob Gale and Robert Zemeckis, the show-stopping production is being shown at the Adelphi Theatre.

Enjoy an adventure of a lifetime for £99 via the Red Letter Days website.

Red Letter Days has revealed ten theatre experiences worthy of the spotlight – How to book your seats. Richmond and Twickenham Times | Theatre …

From Frozen, Harry Potter, Jersy Boys, Matilda and so much more get deals on West End shows. Richmond and Twickenham Times | Theatre …

The Fantastic Five of 14 are coming to the UK on tour, here’s when to get tickets. Richmond and Twickenham Times | Theatre …

Shrek The Musical is coming back for a 2023 UK tour it has been announced. Richmond and Twickenham Times | Theatre …

Watch the nation’s most prestigious night for the world of the stage. Richmond and Twickenham Times | Theatre …