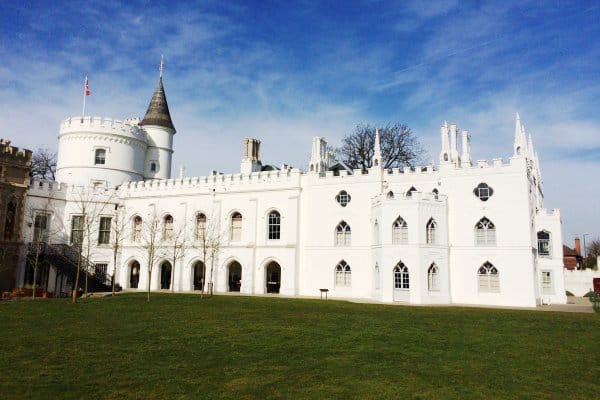 Strawberry Hill House’s story begins in 1747, when Horace Walpole discovered and purchased ‘Chopp’d Straw Hall’, one of the last remaining sites available on the banks of the Thames in fashionable Twickenham. He set about transforming what was then a couple of cottages into his vision of a ‘little Gothic castle’ with pinnacles, battlements and a round tower. Thus Strawberry Hill House was born – the House became a tourist attraction in Walpole’s lifetime and beyond.

Built as Walpole’s summer residence, the castle (or villa) soon became of interest to local inhabitants. Walpole allowed four visitors a day – with tours conducted by his house-keeper – and published rules for their guidance (no children allowed). Walpole also delighted in entertaining foreign ambassadors, royalty and English aristocracy, several of whom were near neighbours: ‘Dowagers like flounders inhabit all around,’ he wrote.

The popularity of Strawberry Hill House was a key contributing factor in the emergence of Gothic Revival architecture that grew throughout the 18th and 19th Centuries, taking its inspiration from gothic cathedrals around Europe. Largely designed by Walpole’s friends, otherwise known as the ‘Committee of Taste’, which comprised John Chute and Richard Bentley, chimney pieces, doors and ceilings were based on gothic vaulting, medieval tombs and rose windows: ‘all Gothicism, gold and looking glass’ as the poet Thomas Gray described it.

Having been imprisoned for ‘riotous behaviour’, George took against Twickenham and vowed to let the House fall into ruin. He arranged the ‘Great Sale’ in 1842, where most of Walpole’s collection was sold over the course of a week.