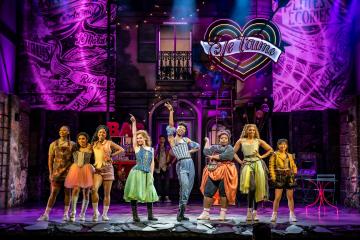 We lay our scene in fair Verona, also known as the Shaftesbury Theatre in the West End, when reporting trio Poppy, Immy and Amy attended a tour of the historic theatre and a viewing of the musical production, & Juliet on Tuesday night.

The Shaftesbury Theatre first opened its doors on Boxing Day in 1911, and has staged many spectacular west-end shows, including Wonderful Town, Hairspray and Rock of Ages.

& Juliet first debuted at the Shaftesbury in 2019, and has since become an iconic, razzle-dazzle show which organisers have dubbed as a “pop star-crossed musical”.

The story follows Juliet Capulet, the leading lady in William Shakespeare’s Romeo & Juliet, and her transformation from a delicate young girl to an independent, empowering woman.

Of course, Juliet faces many trials-and-tribulations throughout the show, including conflicts of families, friendships, and potential lovers.

We eagerly arrived at 6pm and were welcomed in by the Commercial Director at the Shaftesbury Theatre, Gary England, and was given a tour of the entire building, learning the rich history behind the fascinating landscaping designs.

After, Gary led us to the newest addition to the building, the 1911 – a bar which can host from 50 to 225 people for breakfast, meetings, briefings, and receptions.

Here, we enjoyed a huge cheese and meat charcuterie grazing board, alongside some delicious cosmos which were branded with & Juliet stickers.

At the 1911, show go-errs can enjoy a charcuterie board and half a bottle of wine for £25 per person, and for an additional £12, a dessert board can be added on during the interval for £12.

As we tucked-in to our special food for the evening, we fervently discussed amongst ourselves what the show may be about, as none of us had seen the production before.

Before we knew it, the surrounding bar became jam-packed with people and the show was soon to begin – so we grabbed our drinks and headed for our seats in the Royal Circle.

When the curtains drew, our eyes met to a dim-lit stage of Shakespeare himself, played by Oliver Tompsett and his wife, Anne Hathaway – not the actress, to clarify, – played by understudy Collette Guitart.

The pair soon revealed they would be the hilarious narrators for the evening, and due to the expressiveness of Anne, we were taken on a journey of Juliet’s re-written life after the passing of her beloved Romeo.

The book writer behind & Juliet, David West, wrote the character of Juliet to be “brave, witty, articulate, and passionate” – a perfect role model for young women in the 21st century who need a boost of empowerment.

The role of Juliet, Miriam-Teak Lee, was incredible from start to finish – her vocal skills can only be described as compelling, and she met all of the criteria above – it seemed the role was specifically made for her.

There were many memorable moments throughout the show, such as when the audience giggled along to the bizarre romance of Juliet’s Nurse, played by understudy Cassandra Lee and Lance De Buis, the rich father of Juliet’s potential love interest, played by Nicolas Colicos.

A crowd favourite seemed to be when a select few of the cast came together to create the ultimate 14th century boyband – De Bois band – who sang along to Backstreet Boys Everybody and As Long As You Love Me.

Swedish record producer and songwriter Max Martin is the creative genius behind the production of & Juliet, and therefore the show featured many of his songs, including I Want It That Way, …Baby One More Time, Domino, and I Kissed A Girl.

To our delightful surprise, the three of us were not aware of how many legendary pop songs Max Martin wrote, and it was hard to not sing-along to every hit sang on stage.

As the show came to an end, we were in awe of the glitz and the glamour behind the production of & Juliet – the costumes were glistening in glitter and colour, the cast performed immensely throughout, and the ceiling quite literally exploded with confetti – a perfect experience for those who enjoy the more embroidered shows on the west-end.

& Juliet ended in a well-deserved standing ovation, where the audience sang and danced along to Justin Timberlake’s Can’t Stop The Feeling.

Although, our experience did not end here, as we were taken directly on the stage once the show ended, where we stood below the legendary sign ‘& Juliet’ and looked out onto the crowd where the audience sat only a few minutes before.

Our trip to the Shaftesbury Theatre was one we’ll never forget – it was a night full of charisma, beauty, and razzle-dazzle.

The last showings of & Juliet at the Shaftesbury Theatre will be in March 2023, so grab your tickets to the spectacular show before it’s too late.

Have you got a story for us? You can contact us here.

Sign up to our newsletters to get updates sent straight to your inbox.