We are a museum of international rugby history, holding the most extensive collection of rugby football memorabilia in the world, including over 38,000 recorded objects, 15,000 pieces of archival material and 9,000 photographs, from the RFU collection, the Harry Langton Collection and the RFU Rugby Archive. 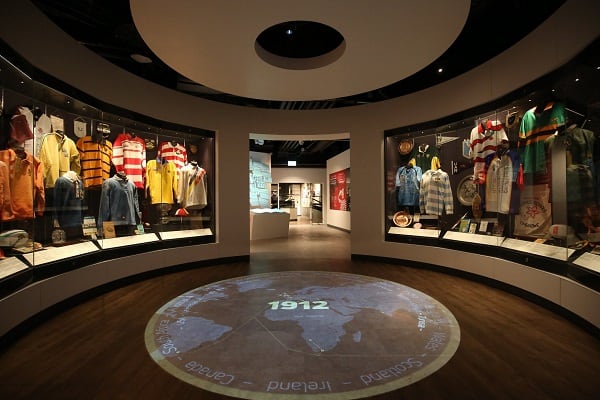 An informal museum was created underneath the South Stand in 1983 before the Museum of Rugby was constructed in the East Stand and officially unveiled in 1996.

In 2007 the Museum of Rugby was renamed the World Rugby Museum to reflect its growing collection and to create a focal point for the heritage and culture of rugby around the world.

In 2017 the World Rugby Museum vacated the East Stand and was completely rebuilt in the South Stand with £1.8 Million capital investment by the RFU.

Our collection of over 38,000 objects are displayed within our permanent galleries and supplement a regular programme of special exhibitions as well as formal and informal learning programmes.

The tour takes you behind the scenes to visit the some of the most exciting and select areas of the Stadium.
The highlight of the trip is a visit to the England dressing room. Also included in the tour are the Royal Box, players’ tunnel, breathtaking view of the arena from the top of the stand and finally a pitchside walk.